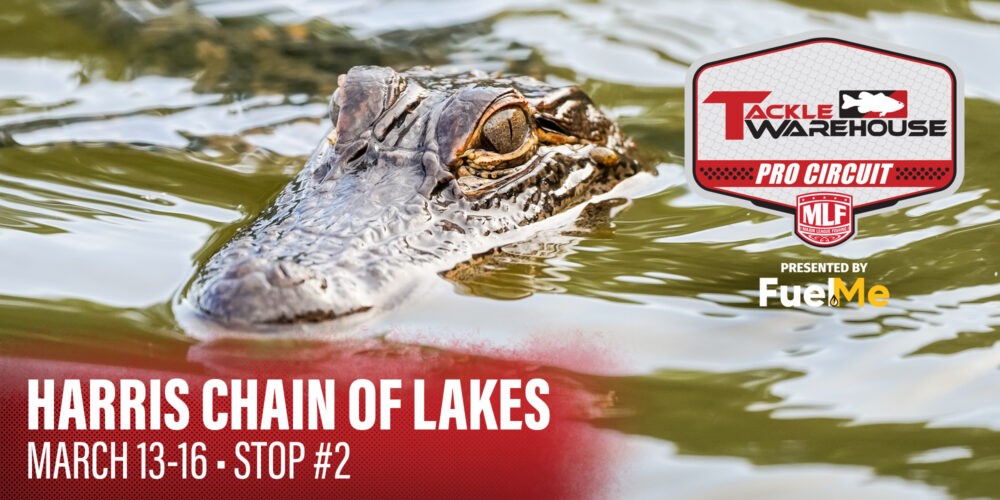 LEESBURG, Fla.– Bass Boat Technologies Stop 2 on the Harris Chain of Lakes Presented by Frogg Toggs is the near-annual annual pilgrimage to Florida, which is always fun for fans and anglers alike. Flip flops will be key, and over the years the Harris Chain has proven to be one of the best tournament systems in Florida, with a high ceiling and more consistent fishing than one usually finds in the Sunshine State. At the Harris Chain, the offshore bite is usually a big player, but it’s far from the only thing going, as folks like Laramy Strickland and Glenn Browne have proven.

The Harris Chain is a collection of lakes in central Florida that includes Lake Harris, Lake Apopka, Lake Griffin, Lake Eustis, Lake Dora, Lake Carlton, Horseshoe Lake, Little Lake Harris, Lake Denham and Lake Beauclair. In all, the pros have the run of 10 lakes, plus the myriad residential canals, rivers and backwaters that spread out from them.

The Harris Chain isn’t quite the typical Florida fishery like Kissimmee or Okeechobee. The water is generally dirtier, and there are a lot more canals and the like leading off the lakes. However, like the Kissimmee Chain, there can be significant travel times associated with longer runs, mostly because many of the canals between the lakes are no-wake.

What to Expect This Time

With the event taking place in March, local Tim Frederick reckons that the usual prespawn and spawn patterns won’t be the ticket.

“Depending on the weather, mid-March, it’s mostly going to be a postspawn deal or shad spawn type deal,” Frederick said. “I think people are going to spread out a whole lot more than they normally would. It’s not going to be 25 boats in one flat of grass, I think you’ll see a lot more people fishing all the lakes.”

Generally, the presence or lack thereof of offshore hydrilla is key on the Harris Chain. This year, Frederick said it is pretty slim pickings in every lake outside of Griffin, which might mean no single lake gets the bulk of the pressure. In last year’s March Toyota Series event, anglers made the Top 10 out of at least five of the lakes in play.

Because the bite ought to be out of the spawn phase, Frederick thinks the shad spawn will play a big role in the event and the usual warming effect of the afternoon sun won’t matter much.

“I think the first couple hours of the morning are going to be crucial,” said Frederick. “I’m not saying you can’t catch big fish after that, because you can, but it’s going to be important to catch that quick limit. You’ll get a few more bites during the day, but if you’re at noon and you’ve only got two fish, you might be in trouble.”

One of the best examples of a shad spawn leading to a win was when Chris Johnston won in late February of 2018. Then, the Canadian pro waylaid bass at sunrise on a hydrilla wall in Harris. Last year’s Toyota Series event demonstrated that even with a shad spawn going, it’s not the only thing. While Jordan Thompkins won cranking a hard spot, Michael Conley caught some deep spawners and a few pros ran brush.

Along that diverse line of thinking, Frederick notes an additional pattern that could play.

“Mid-March, if it stays warm, bluegill beds could play big, actually,” Frederick said. “I look forward to it, it’s not going to be the same old, same old.”

The Harris Chain has more variety than the typical Florida fishery, and you can expect to see that reflected on the front deck at takeoff. Crankbaits and Carolina rigs will catch offshore bass, and swimming worms and vibrating jigs are always essential there. For a shad spawn, topwaters and swim jigs could get a workout as well.

Additionally, a jerkbait has done a lot of damage at the Harris Chain recently. Plus, spawning bluegill could make for a good frog bite, and you can never count out flipping and punching in Florida.

The 2022 Pro Circuit field boasts a stunning 19 pros from the Sunshine State. So, if you want to go local, you’re going to have too many options. From established stars like John Cox and Bobby Lane to the McMillan brothers, Frederick, Randall Tharp, Trevor Fitzgerald and Laramy Strickland, you’ve got a massive pile of talent to sift through. Of course, that’s without even counting Chris Lane, who may live in Alabama, but certainly has plenty of Florida chops, including a 2012 Bassmaster Open win on the Harris Chain when he made the rest of the field look foolish.

Outside of Floridians, there are a lot of other interesting options. Folks like Brett Hite, Josh Weaver, and Braxton Setzer have demonstrated a real knack for the Harris Chain and offshore Florida grass in general. Plus, you’ve got tons of pros that have made impressive cuts in the past on the Harris Chain with anglers like Jimmy Washam, Miles Burghoff, Matt Stefan and rookies Nick Hatfield and Lance Oligschlaeger.

Second Stop of 2022 Season Showcases 158 Professional Anglers Competing Over Four Days for Top Prize of $135,000 and Season Purse of More Than $6 Million

LEESBURG, Fla.– Major League Fishing is set to return to Lake County, Florida, next week, March 13-16, for the second event of the 2022 MLF Tackle Warehouse Pro Circuit Presented by Fuel Me regular-season – the Bass Boat Technologies Stop 2 on the Harris Chain of Lakes Presented by frogg toggs.

Hosted by Visit Lake County, the four-day tournament marks the second of six regular-season Pro Circuit events, the sport’s premier five-fish-limit tournament circuit. The event will feature 158 of the top anglers from around the country – including 19 pros from Florida – competing for a total purse of more than $850,000, and valuable points to qualify for the 2022 Tackle Warehouse TITLE Presented by Mercury, the Pro Circuit Championship, and the coveted Pro Circuit Angler of the Year (AOY) title.

The event will mark the fourth time the Tackle Warehouse Pro Circuit (formerly the FLW Tour) has competed on the Harris Chain of Lakes. When the Circuit last visited Leesburg in February 2020, local pro Laramy Strickland of Bushnell, Florida, fishing in his rookie season, won the weather-shortened event with a three-day total of 61 pounds, 4 ounces. Strickland won by flipping a Reaction Innovations Spicy Beaver throughout a 600-acre duck marsh in Lake Griffin. This time around, Strickland says that he expects the bass to be in multiple different phases, and anglers will be able to fish their strengths and do well with numerous different baits and tactics.

“The key to doing well in this tournament is going to be picking an area where the fish are coming and going,” Strickland said. “I think we’re going to see fish in all three stages of the spawn – pre-spawn, spawning and post-spawn. I think the majority of fish have spawned already, but we’ll still catch fish from all three stages and you can expect to see everything in this tournament.

“The (Harris) Chain has been beat up a little bit with the number of tournaments there the past few weeks, but it still is fishing really well,” Strickland said. “It’s going to take at least 75 to 80 pounds to win this one, no doubt.”

The Harris Chain of Lakes includes Lake Harris, Lake Apopka, Lake Griffin, Lake Eustis, Lake Dora, Lake Carlton, Horseshoe Lake, Little Lake Harris, Lake Denham and Lake Beauclair. In all, the pros have the run of 10 lakes, plus the residential canals, rivers and backwaters that spread out from them.

“I imagine that the field will be pretty spread out,” Strickland said. “Most of the guys in the field will have had experience here and will be spread all over the map. That being said, it’s still Florida-fishing and we’re going to see some areas that are pretty popular. I think Banana Cove in Lake Harris will be a big player.”

Strickland said that he expects the standard Florida-fare of baits to be popular choices amongst tournament competitors.

“Guys are going to catch them on ChatterBaits and (Zoom) Speed Worms,” he said. “I think we’ll see some topwater fish play. We’re going to see some flipping fish; lipless crankbaits. With all three phases of the spawn in play, we’ll be able to catch them pretty much however we feel most comfortable.”

In Tackle Warehouse Pro Circuit competition, the full field of 158 anglers compete in the two-day opening round on Sunday and Monday. The Top 50 pros based on their two-day cumulative weight will advance to Tuesday. Only the Top 10 pros, based on cumulative weight from the first three days, will continue competition on Championship Wednesday, where weights will be zeroed and anglers will compete in a one-day shootout for the grand prize of up to $135,000, including the lucrative $35,000 Phoenix MLF Bonus for qualified anglers.

Anglers will take off at 7:30 a.m. ET, Sunday through Wednesday, from the Ski Beach at the Venetian Gardens, located at 201 E. Lake Harris Drive in Leesburg. Weigh-ins will also be held at the Ski Beach daily at 3:30 p.m. Fans are encouraged to attend the morning take-offs and afternoon weigh-ins, and also follow the live on-the-water action all four days of competition online on MLF NOW! beginning at 8 a.m. ET at MajorLeagueFishing.com.

The MLF Tackle Warehouse Pro Circuit Bass Boat Technologies Stop 2 on the Harris Chain of Lakes Presented by frogg toggs will feature live on-the-water coverage and a two-hour action-packed television show that will premiere on the CBS Sports Network on Saturday, July 16 from 7-9 a.m. ET.

The 2022 season culminates with the Tackle Warehouse TITLE Presented by Mercury, the Pro Circuit Championship, where the Top 48 pros in the points standings, along with the 2021 TITLE Champion and 2021 Angler of the Year, will compete for a top prize of $235,000. The 2022 TITLE will be on the St. Lawrence River in Massena, New York, Aug. 16-21, and is hosted by the Town of Massena.