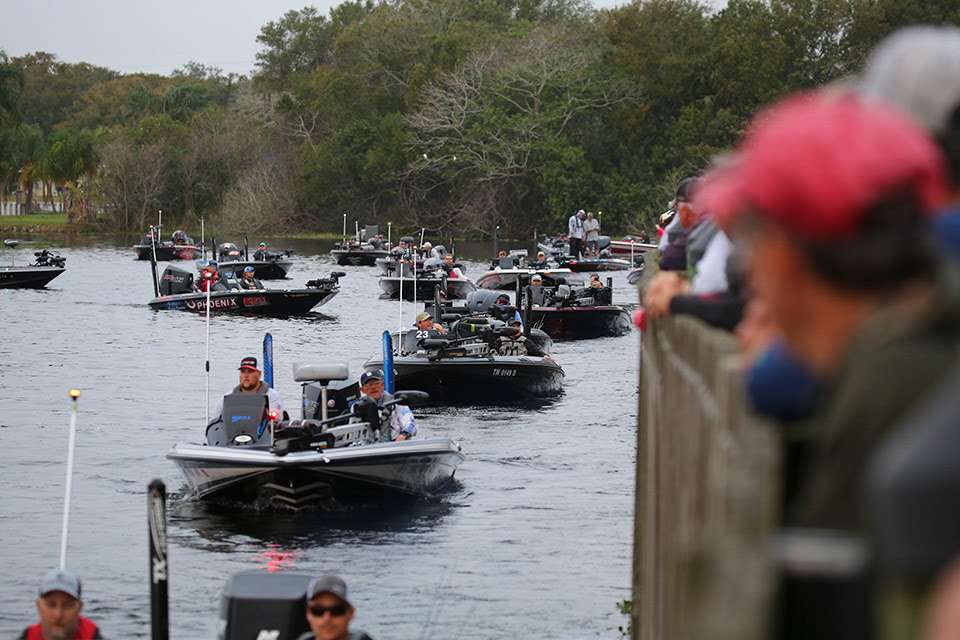 KISSIMMEE, Fla. — Spreading out will not be a problem for anglers competing in the St. Croix Bassmaster Southern Open on the Kissimmee Chain of Lakes, but Bassmaster Elite Series pro Scott Martin said the key to success lies in leveraging that massive area for insulation against seasonal weather fluctuations.

Competition days will be Feb. 3-5 with daily takeoffs from Big Toho Marina (Kissimmee Lakefront Park) at 7 a.m. ET and weigh-ins each day at the park at 3 p.m.

“Lake Toho is full of grass, with very clear water and fairly normal water levels,” Martin said. “When you lock through and get into what we call the lower chain, which is Cypress Lake, Hatchineha and Kissimmee, the water level in that system is a lot lower this year because (the state) is doing some work on areas of the canal in Lake Cypress, so they’ve kept the lake lower.

“That’s going to affect some of the shoreline bites around the lake. In the past, when we’ve had higher water, on the lower chain, you have a lot of arrowheads (an emergent vegetation) and a lot of swampy-type habitat, but that might not be an option this year because of the water levels being down.”

Martin said if the lower chain’s water level remains low through the tournament, anglers will likely shift their focus more to offshore targets such as lily pads and submerged vegetation. Toho should allow anglers to take their pick of the usual menu.

“Toho’s always going to shine, but it can be won anywhere,” Martin said. “We’ve had unseasonably warm conditions all the way up until (the third week of January) when it got as cold as it’s been the last several months.

Martin predicts that Toho’s offshore game holds the greatest winning potential. The key, he said, will be locating the prime stretch of shellbars.

“You literally can win a three-day tournament on one spot,” he said. “A big school will park there and you can catch a big sack. Most lakes in Florida are featureless, and when you have a shell bottom, it attracts shad and bluegill and the bass go there to feed.

“A lot of people know that now and probably are going to spend a lot more time on Toho. That’s when a sneaky little area on the lower chain can be a lights-out situation.”

Martin said Toho’s offshore game will be dominated by swimbaits, bladed jigs, lipless baits and Carolina rigs. If the fish move up to spawn, he suggests swimming worms, frogs and ChatterBaits.

On the lower chain, pitching Texas-rigged creature baits and Senkos in pads or casting lipless baits and bladed jigs around submerged vegetation are common patterns. If cold weather persists, punching mats and fishing the canals could play a role.

“The key will be paying attention to the weather and finding fish on the upper chain and finding an offshore pattern in the lower chain,” Martin said. “Weather can change and shut down one or the other, especially big winds from a cold front will bring waves and affect water clarity. So, you have to be prepared.”

Well-known for its abundance of huge fish, the Kissimmee Chain produced the heaviest single-day catch (five-bass limit) in B.A.S.S. history — Dean Rojas’ astounding 2001 mega bag that weighed 45 pounds, 2 ounces. That event was held in mid-January, so Opens anglers will be competing in the same general time frame.

Rojas found a key stretch at the mouth of Shingle Creek, where a wave of giants had just moved up to spawn. Such magic moments are rare, but that same quality still swims these waters.

The tournament is being hosted by the Kissimmee Sports Commission.

This article was published in it entirely directly from the content owner BASS.