Hall Triumphs by 1 Ounce on Final Day at Champlain 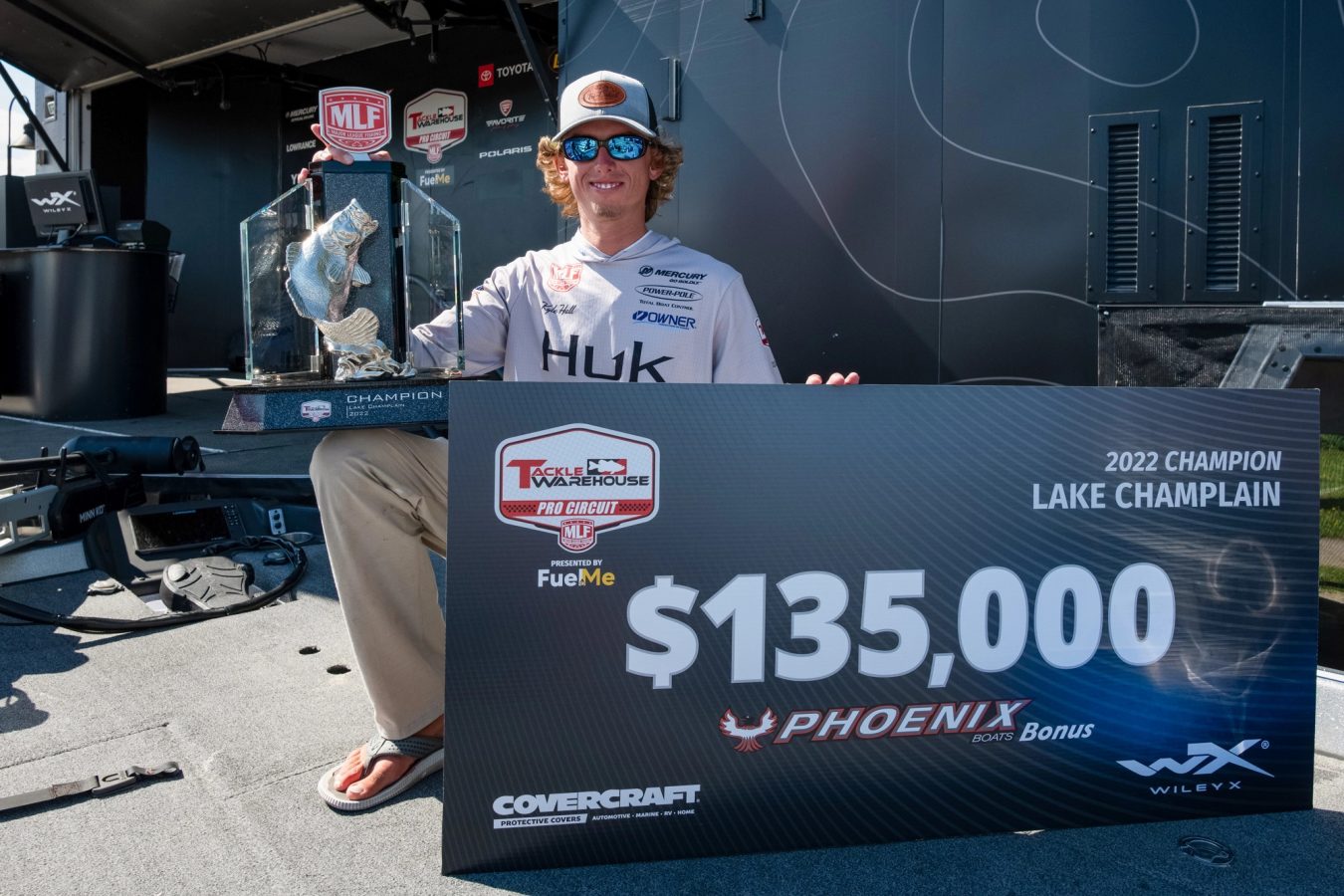 Hall Triumphs by 1 Ounce on Final Day at Champlain

PLATTSBURGH, N.Y. – Kyle Hall sat on the hot seat with two competitors headed to the scales. The 21 pounds, 6 ounces he boated during a 10-man shootout on Championship Monday was enough to get him close to a trophy and a $135,000 payday; but to claim it, he would have to go through a Tackle Warehouse Pro Circuit champion and his closest trail brother.

Prolific angler Jon Canada was up first. Canada, who already claimed a Pro Circuit win this year at Pickwick, was on a tear and the entire lake knew it. According to the tournament’s unofficial live leaderboard, Canada was tied atop the standings with Hall. But, when the veteran’s monstrous bag of smallmouth finally hit the scales, it came in at 21-5 — just an ounce shy of Hall.

When those numbers blinked across the screen, Canada smiled and laughed.

“We were talking about a fish-off in the line,” said Canada, referring to the one-hour fish-off that would break a tie for first place. “But I’ve already won one this year. I’m just as excited for these kids as I would be for me.”

As he left the stage, Canada pointed at Hall. Perhaps, because he knew an all-time Tackle Warehouse Pro Circuit moment was about to take place. As Hall squirmed in the hot seat, the final angler approached. Dakota Ebare, his longtime roommate, stepped up to the stage.

Ebare, too, had been a lightning rod for smallmouth on the tournament’s final day. Like Canada, Ebare also carried a 21-pound total on the unofficial live leaderboard. As Ebare toted a hefty bag of bass towards the scale, the crowd gathered on the Plattsburgh waterfront began to realize what was at stake.

“I wouldn’t be standing on this stage today without Kyle and his family,” Ebare said. “It gives me chills, you know? It chokes me up because his dad just saw a kid that wanted to go fishing pretty badly and he helped me get here.”

As Ebare brought his fish individually to the scale, a tense numbers game played out in real time.

Ebare’s first fish came in at 4-1, the exact same weight as Hall’s just moments before. His second fish brought his total to 8-7, one ounce less than Hall. The total grew to 12-9 by the third fish; up by one ounce on his close friend. With one fish left to weight, Ebare’s 16-13 bag needed a single 5-pound kicker to top Hall and capture his first Pro Circuit Championship.

Ebare didn’t have it. His 21-1 total put the Brookeland, Texas, pro in third place.

Hall took the win, the check, the trophy and the glory. Then, the brothers shared it all on stage as a sea of friends, family, and photographers swarmed around. Stunned, Hall was nearly rendered speechless by the events.

“That’s my roommate,” Hall said. “We were up here for 59 days the first time we came up here to learn how to catch smallmouth. We spent almost every day on the water between here and Ontario. There were days when we would ride together. There were days that we would go our separate ways. But we were out there every day that it wasn’t too windy to learn and spend time on the water.”

It was Ebare who connected Hall to the Coty family; New York locals that would welcome the anglers into their home over the next several years, offering a financially feasible way for two young anglers from Texas to learn the patterns and techniques of smallmouth country. And if today’s result is any indication, the brothers used that time effectively.

Throughout the week, Hall was able to hone in on roving schools of Lake Champlain smallmouth that were following transient bait.

“They weren’t really in one spot,” he said. “I was chasing fish all over the place.”

Hall leaned heavily on Garmin LiveScope to scout for fish in 14 to 16 feet of water, where he could deploy a Strike King Baby Z-Too on a drop-shot to trigger a bite. That method earned Hall the top spot twice during the three-day qualifying round to fish on Championship Monday. And on the final day, it earned him a win that he will remember for a lifetime.

In two weeks, the Tackle Warehouse Pro Circuit will reconvene about 80 miles west of Plattsburgh. There, on the St. Lawrence River, the top 49 anglers from this year’s season will battle it out for the Tackle Warehouse TITLE Presented by Mercury. After a rocky season, the newest Pro Circuit champion will not be in the field. But for the 25-year-old Hall, today’s hard-earned win is a lesson in perseverance.

“I was blown away with the weight,” Hall said. “I really didn’t think I had that. But it just shows you — keep grinding.”

After six years, hundreds of hotel rooms and thousands of hours on the water, the grind paid off.