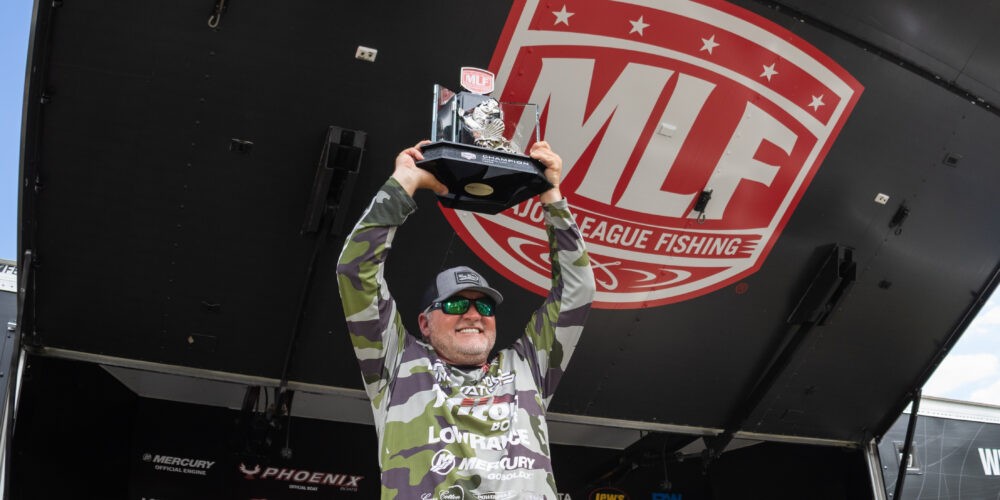 Canada Wins With 20 Pounds on Final Day at Pickwick

COUNCE, Tenn. – Jon Canada was down to one rod he never expected to hold with Championship Sunday’s final minutes dwindling away when he caught the fish he always believed was there during Lithium Pros Stop 3 on Pickwick Lake Presented by Covercraft.

For two and a half days, the Alabama pro had milked a stretch of shallow, main-lake bars loaded with stumps that had him in contention to win on the final day of the Tackle Warehouse Pro Circuit Presented by Fuel Me event. And just before 1 p.m., unbeknownst to him, he and Justin Lucas were separated by mere ounces on the live leaderboard.

What he did know was he was still a couple pounds shy of the 20 pounds he felt he needed to win, and he had just broken off a good fish (and had broken off his two other drop-shot rigs). So, with little time left, he re-rigged one rod and promptly caught a 5-pounder that launched him to 20 pounds even and his first major victory.

“Catching that fish this afternoon saved my tail,” Canada said of his late kicker. “I knew the number, that if I could catch 19-20 (pounds), I could win. My scale said 19 pounds. So, obviously my scales are little light, but I’ll take it. It’s not a bad thing.”

Not a bad thing at all.

In fact, most of Canada’s week was all about good things, specifically good decisions. Canada made two big decisions this week, both of which were based on nothing but faith. One decision provided what ended up being the winning area, and the second expanded his area to virgin waters that sealed the deal.

However, at noon on Day 2, Canada only had two fish, which prompted his first big move.

“When I had two bass, I prayed,” Canada said. “I said, ‘Lord, please just give me an idea of what to do.’ I wanted to stay, but I knew the shallow bite was going away.

“So, I was running down the river, and I saw (the winning area) and thought, ‘I need to go over there and check.’ I’d caught two of my biggest bass on Pickwick in practice there for other events. So, I knew grown ones live there. And I’d spent two days idling in pre-practice, marking every stump on it. So, I’d done my homework.”

The area was just above the Natchez Trace bridge, where there were a few shallow bars. The main one was about 4-to-7 feet deep and had more than 40 stumps on it, which Canada would target with a combination of his Humminbird MEGA 360 and forward-facing sonar.

Within minutes of showing up, he caught a 4-pounder on a shaky head, which he said made “a light bulb go off.”

“I switched to a drop-shot because it’s more efficient,” Canada said. “I can fish it faster and more thorough.”

His drop-shot was tipped with a Reaction Innovations Flirt Worm (morning dawn), and the bass immediately told him he made the right choice, as he had nearly 20 pounds within 30 minutes. Needless to say, he caught just enough on Day 3 to make it to the final day before laying off. And today, he put the hammer down to see what he could produce, which ended up being around 17 pounds for most of the day.

However, his second key decision came near the end of the day.

While he was catching fish almost at will – something few others managed throughout the event – Canada wasn’t getting the big bites he felt he needed to win.

“The fish left my main stretch today because I think they were done spawning,” Canada said. “But I had another stretch I hadn’t ever fished before. I decided to try it, and that’s where I got that big one to win it.”

To say Canada was shocked to win is an understatement. While he felt he had a special area and pattern, and was fishing well enough lately, he admits the idea that a dyed-in-the-wool power fisherman like himself would win with a spinning rod truly was something he never could’ve dreamed of, particularly on a lake like Pickwick.

“I never thought I’d do it on a spinning rod,” Canada said. “I got a lot more comfortable last year with spinning gear, spending a couple months up north. So I make fun of it; but hey, I’ve learned and got my first win with it.”