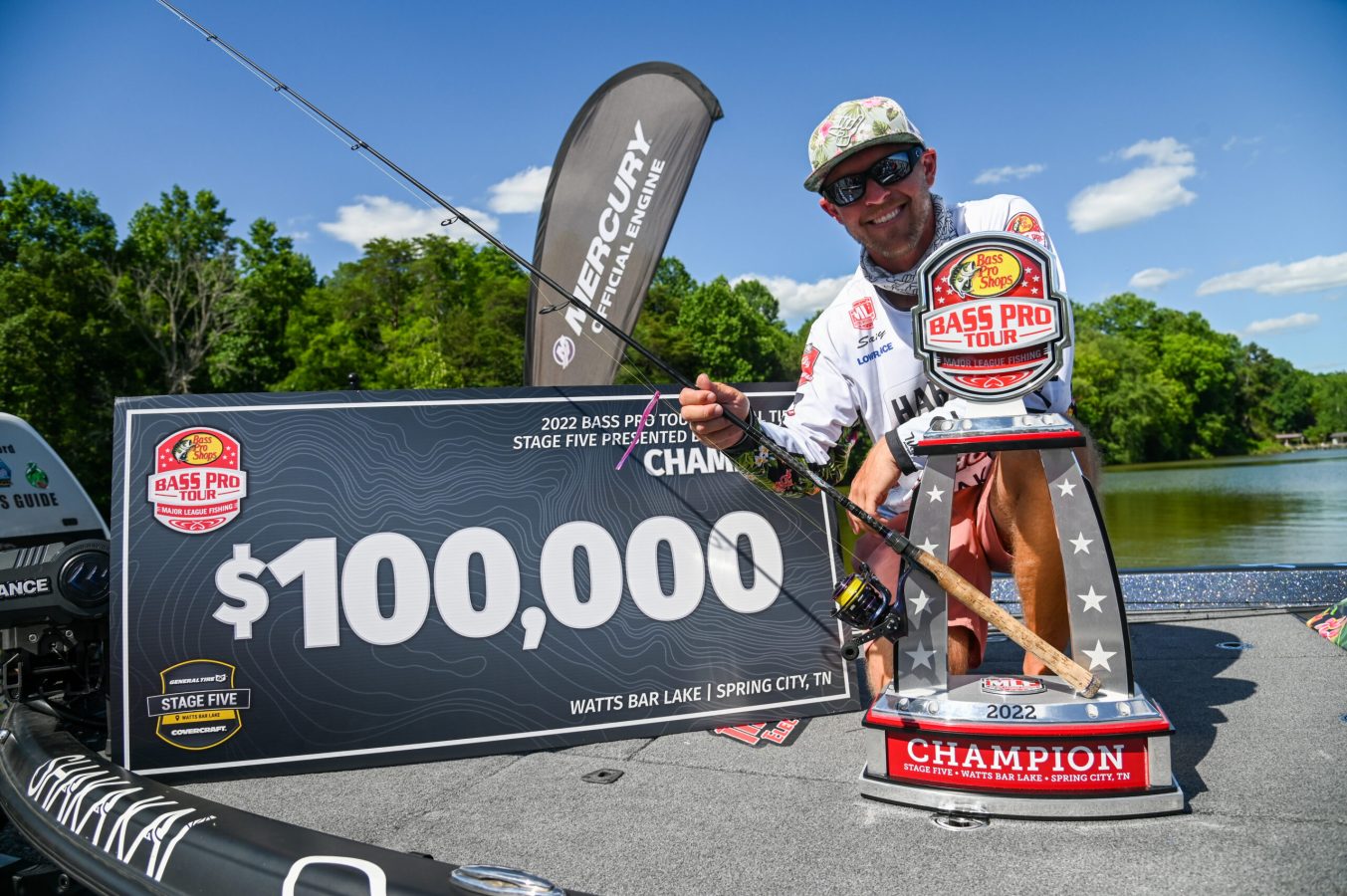 SPRING CITY, Tenn. – It was a fight to the finish during Thursday’s Championship Round among the very best anglers in the sport, but when time ran out it was Mercury pro Ryan Salzman of Huntsville, Alabama, whose name sat at the top of the SCORETRACKER® at the General Tire Stage Five on Watts Bar Lake Presented by Covercraft in Spring City, Tennessee. The Bass Pro Tour newcomer weighed 13 bass totaling 24 pounds, 3 ounces, to earn his first Bass Pro Tour win – as well as his first major career win – and take home the big red trophy and the top award of $100,000.

“Right now, I’m just putting all my trust in God, and that’s the only way I can rise up to this moment, because it’s too big for me,” Salzman said in the final moments as the clock ticked down. “Words just can’t describe how I feel even being in contention to win this event, especially going up against some of the greatest anglers in the world. Fishing against my childhood heroes, it’s just amazing.”

“I never in my life thought I would win this event,” Salzman said excitedly, amid cheers from fans and followers who surrounded him on the water. “I knew the winning fish were in this area, but I didn’t know if they would bite today. I’ve lost several fish this week, even lost two or three today that would have given me more of a cushion at the end of the day, but I’m just speechless and so thankful for this opportunity.”

Thursday marked the first time the Alabama pro has qualified for the Championship Round on the Bass Pro Tour since joining the tour in February and culminated in a moment he said he will never forget.

“First and foremost, I have to thank my Lord and Savior, Jesus Christ,” Salzman said. “I’ve been a mess the last few years but have made a lot of life changes and attitude changes, so to go from where I was 3-4 years ago, to where I am today, there just isn’t anything that He can’t do.”

Salzman said he found his winning area above the Tennessee Valley Authority’s (TVA) Watts Bar Dam during practice and knew it had potential, but as the tournament progressed, he realized the bass were only schooling and feeding during certain time windows.

“This has been a week of highs and lows and the way my tournament began, I didn’t think this win was a possibility,” Salzman said. “I found this spot above the dam on the first day, with hundreds of bass schooling and stacked up against this wall. I knew there were enough fish here to win the event, I just had to figure out how to catch them.”

Salzman hit the first obstacle during his Qualifying Round, in large part because the fish in his winning area weren’t schooling. He finished in 15th place after his first day and ended the second day in 16th place to advance to the Knockout Round – and that’s where the fun really began.

“On Wednesday, the TVA began running water through the dam, generating 30,000, 40,000 watts, stirring up the bait fish and in turn, the bass,” Salzman said. “Once they started moving the water, this spot really lit up. The majority of the fish I caught this week were right here in this spot, on a 4½-inch morning dawn-colored Roboworm with an 1/8-ounce Titan Tungsten ball weight.”

Salzman’s flurry halted to a stop about an hour and a half prior to the end of the tournament day, as the TVA turned down the generators and the bass around him stopped feeding. Not to be deterred from the win, Salzman made a quick pivot to another place on the dam, boating a 2-pounder.

“With only 25 minutes left in the day, that kicker fish made all the difference,” Salzman said.

The Mercury pro earned the win by a slim 11-ounce margin over Academy Sports + Outdoors pro Jacob Wheeler of Harrison, Tennessee, who finished Championship Day in second place with a total of 10 scorable bass, weighing 23-8. Although Wheeler missed the $100,000 win by mere ounces, he earned valuable points in the 2022 Bally Bet Angler of the Year (AOY) race. Wheeler, the reigning 2021 AOY winner, currently leads again with 379 points after five regular-season events, while Jordan Lee sits in second place with 341 points. Dayton, Tennessee’s, Andy Morgan sits in third with 315 points. Kevin VanDam is in fourth place with 302.5 points, while Randall Tharp rounds out the top five with 302 points.

Full results for the entire field can be found at MajorLeagueFishing.com.

The General Tire Stage Five on Watts Bar Lake Presented by Covercraft featured anglers competing with a 1-pound, 8-ounce minimum weight requirement for a bass to be deemed scorable. Minimum weights are determined individually for each competition waters that the Bass Pro Tour visits, based on the productivity, bass population and anticipated average size of fish in each fishery.

The six-day event, hosted by Fish Dayton, the Rhea County Economic Tourism Council and Spring City, Tennessee, showcased 80 of the top professional bass-fishing anglers in the world competing for a total purse of $805,000, including a top cash prize of $100,000 to the winner.

The Bass Pro Tour features a field of 80 of the top professional anglers in the world competing across seven regular-season tournaments around the country, competing for millions of dollars and valuable points to qualify for the annual General Tire Heavy Hitters all-star event and the REDCREST 2023 championship.

SPRING CITY, Tenn. – For the fourth time in five events in the 2022 Bass Pro Tour season, there’s a first-time champion. Ryan Salzman is the General Tire Stage Five Presented by Covercraft champion on Watts Bar Lake after catching 13 bass for 24 pounds, 3 ounces and beating second-place Jacob Wheeler by just 11 ounces. The is Salzman’s first professional-level win since becoming a full-time pro in 2019.

The key for Salzman on Thursday, and really his final two days of competition, was camping out near the Tennessee Valley Authority’s Watts Bar Dam. The Alabama pro was there all day during the Championship Round and for the majority of the Knockout Round. Even though the dam was productive for him over his final two days, the spot had been on his radar since his first Qualifying Round.

“I found this spot on the first day and I noticed that there was enough fish to win here on my electronics,” Salzman said. “The first two days I fished here, the fish didn’t school up though. During the Knockout Round, the TVA decided to start generating 35,000-40,000 watts by running water through the dam and it really lit this spot up.”

With that running water, Salzman tied on a drop-shot consisting of an 1/8-ounce tungsten weight with an 18-inch leader and a 4.5-inch Roboworm in morning dawn color. That combination got him through to the Championship Round, so of course, that’s what he went with on Thursday.

Salzman was looking good through his first two periods, catching nine bass for 16-6 and sitting in second place behind Wheeler. But when the TVA stopped pulling water through the dam in the third period, it could have spelled danger for Salzman.

“They stopped pulling the generator around 2 p.m. today, and that caused the bass to stop chasing bait,” Salzman said. “So, I moved away from the generator and back to a place on the dam where I first started. That move got me a 2-pounder with about 30 minutes left and that was the difference.”

That 2-pound largemouth with only 26 minutes left in the day pushed the HARDCORE pro ahead of Wheeler by just 15 ounces. Wheeler was unable to get another scorable bass on the board as time expired, giving Salzman his first pro-level win and a $100,000 check.

A Look at the Bally Bet AOY Race

While he didn’t come away with a win, Wheeler earned some big points once again in his chase for back-to-back AOY titles. Wheeler entered Stage Five with a 17-point lead over Jordan Lee for the top spot. With his second-place finish on Watts Bar and Lee’s 23rd-place finish, Wheeler’s lead increases to 38 points over Lee with only two events left in the 2022 season. Wheeler’s lead over third-place Andy Morgan has grown to 62 points.

If Wheeler can muster solid finishes on Cayuga Lake in August and Mille Lacs Lake in September, it may be more than enough to solidify Wheeler as the AOY in 2022.

The Bass Pro Tour returns on Aug. 6 as the 80 pros head to Cayuga Lake in Union Springs, New York, for Stage Six.