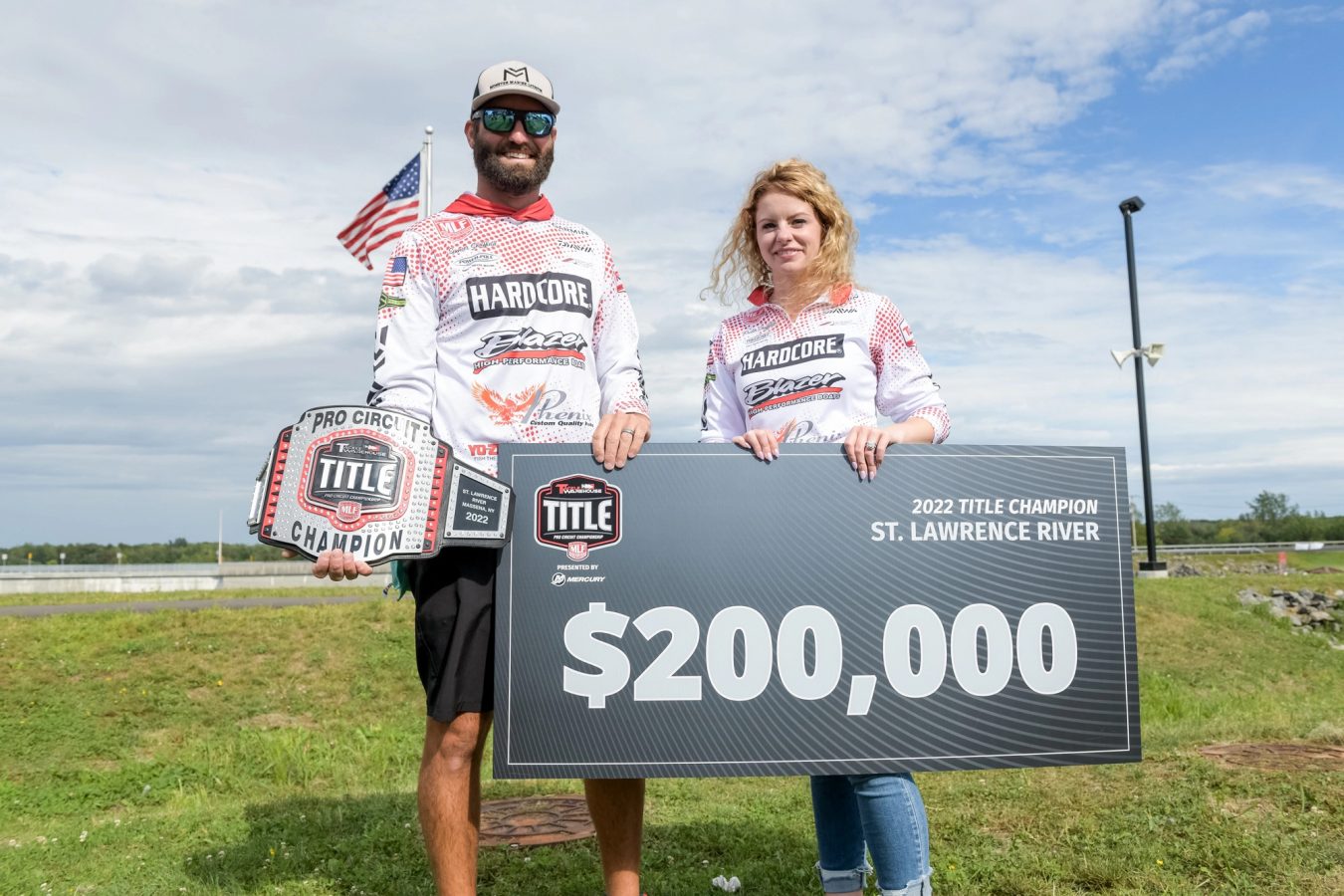 MASSENA, N.Y. – Spencer Shuffield always knew – he didn’t know when or the rough road of heartbreak and near-misses he’d travel to do it, but he knew one day he’d get that major victory.

The Arkansas pro brought in 22 pounds, 12 ounces to take home the TITLE belt and $200,000. But that hardly tells the whole story, because in doing so, he not only bested the other nine anglers in the Championship Round. He battled and beat a lifetime of nemeses, from Mother Nature to the snake-bitten curse he’s seemingly carried since reviving his career only a few years back.

“I knew I was going to do it,” Shuffield said of his win. “I didn’t know when or how hard I was going to have to work to do it, but when you set your mind to something, you’re going to accomplish it, and I did.

“I really thought (the 2020 Tackle Warehouse TITLE) at Sturgeon Bay was the one. It wasn’t right. It wasn’t my time, but it was today.”

Shuffield admits he got a feeling it could happen while launching this morning.

While he’d joked with friends prior to the event he wasn’t going to spend the hundreds of dollars a day in gas to run down to the Clayton, New York, area, that’s ultimately what he did in practice because he says it’s not in him to “lay up.” That attitude paid off when he found a mile stretch on the Canadian side that turned out to be the winning spot.

Shuffield admits the area is pretty “featureless,” just a deep cut between two spawning bays with a deep weed line. Yet, off the edge of those weed lines were sandy shelves that extended 20 feet before dropping off into the channel.

The first day of the Qualifying Round, he caught 21-5 there, but it was late in his second day when he found three small piles of rocks on those shelves. He only had time to fish one, but he caught a 4-pounder, jumped off a 6-pounder and broke off another big one before leaving to weigh-in.

So, the last two days he’d been chomping at the bit to see what the trio held. He found out within the first 30 minutes today when he had 18 pounds off just one of them.

Of course, that’s when Mother Nature decided to remind Shuffield of their feud.

“That wind come in, I seen that storm coming, and I was like, ‘not again,’” Shuffield said.

You see, back at the 2020 TITLE at Sturgeon Bay, Shuffield felt without a doubt he had the winning fish going into the final day, only for the wind to blow so hard he couldn’t get to them. So once again seeing storms and wind on the final day of the Championship Round was déjà vu in the worst way.

Fortunately, while the rain didn’t let up for a while, the wind did after 20 minutes. Once that happened, Shuffield felt the conditions, while nowhere near as nice as the sunshine we’d seen all week, were still “manageable.”

That allowed him to keep grinding and slowly upgrading, as he figures he never went more than 25 minutes without a bite on his drop-shot or Ned rig all day. On his drop-shot, he used a Berkley PowerBait MaxScent Flat Worm (green pumpkin party or brown back) on a No. 2 Gamakatsu Drop/Split Shot Hook, with a ½-ounce Ark Tungsten No Chip Skinny Drop Shot Weight with a 6-pound test Yo-Zuri T-7 Premium Fluorocarbon leader all thrown on a 7-foot, 4-inch, medium Phenix M1 rod. For the Ned, it was a 7-foot, 2-inch, medium Phenix M1 rod, the same leader and a Z-Man Finesse TRD (green pumpkin goby) on a 3/8-ounce WOO! Tungsten Ned Head Jig.

Yet, with 30 minutes left, Shuffield says he figured he still needed one more big bite to get him over the 22-pound mark. So, he went back to one of the rock piles where he felt he’d hooked and lost the same 5-pounder twice earlier in the day. Incredibly, what he feels was the same fish was still there, and he boated the 5 ¼-pounder this time. And when he caught a 4 ¼-pounder with 15 minutes left before the long run back, that’s when he felt he might’ve done it.

“I just got that feeling that was the one,” Shuffield said.

“Smallmouth fishing is a passion for me. I have a drive to catch the brown fish. I just fish totally different, and so to get this first big win on them, and it be a championship … it feels good.”